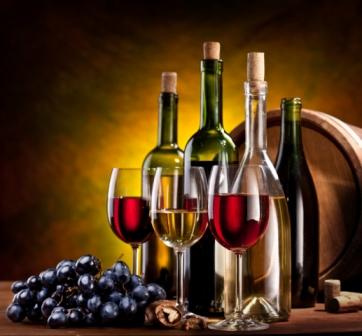 What is behind the supposed benefits of red wine? Many people worldwide enjoy a glass or two of red wine daily and have heard that there are many health benefits to drinking it. Are there?

First a little background before we get to the benefits of drinking red wine. A component of the aging process is oxidation, the same process that causes rust. Oxidation is a natural process in the body but 1-2% of cells during the oxidation process will become free radicals that can damage other cells.

Antioxidants are substances that slow down the process of oxidation in the body by stabilising free radicals.

In some organisms, such as yeast and fruit flies there is evidence that reducing oxidative damage can extend lifespan. In mice, interventions that increase oxidative damage generally decrease lifespan. So it pays to have antioxidants in your system.

Vitamins C and E are the most commonly recommended antioxidants, but they only reduce oxidation by up to 20%. There are other antioxidants (e.g. amines, flavonoids and phenols) that are even more effective.

The main antioxidants in wine are quercitin, epicatechin, and Resveratrol (a polyphenol and apparently the most powerful antioxidant in red wine). These antioxidants can reduce oxidation by up to 100% i.e. stop oxidation completely and are probably what produces any of the benefits of red wine

The wine fermentation process produces alcohol and frees antioxidants from the skin of the grapes.

These antioxidants block the effect of the free radicals. Sounds good.  So there seem to be some benefits of red wine consumption.


The reality though is that red wine contains very little resveratrol.

The current laboratory dose used in most studies to extend the life of lab rats is the equivalent of 100 bottles of red wine per day for humans. Convincing clinical studies, use amounts roughly equal to that found in 667 bottles of red wine (about 1 gm of resveratrol per day). That is a lot of bottles to get the benefits of red wine.

Some studies show that just 30 bottles of wine a day may have benefits.

Of course consuming this amount of wine will put you in hospital or more likely result in death.

However, it has also been widely demonstrated that relatively low doses of Resveratrol, but above that provided in the diet, has potential health benefits.

The amounts used in one mice study were the equivalent of one person consuming one bottle of red wine per day, which is better than 30 bottles but still not advisable. Since drinking alcohol in excessive amounts can have harmful health effects, doctors generally recommend moderate red wine consumption, which is an average of two drinks a day for men and one drink a day for women.

Unfortunately, this is unlikely to have any potential health benefit.

National Institute of Health researchers believe that the levels of resveratrol found in wine or foods are probably not high enough to produce any significant health benefits or problems in humans.

Moderate drinkers tend to live longer than non-drinkers but perhaps researchers missed an important factor involved with the consumption of alcohol.

It is usually consumed as part of a social interaction that often includes friends.

Having a network of friends has been shown to extend your lifespan.So perhaps that is the reason why there appear to be health benefits of red wine.

So the message is ‘Don’t rely on red wine to provide you with levels of resveratrol that will improve your health’ but having said that there may be a synergistic effect of the various compounds in wine (estimated at 600 including antioxidants).

At a meeting of the American College of Gastroenterology in Las Vegas in 2006 researchers from Stony Brook University in New York presented evidence that drinking more than three glasses of red wine a week could cut the risk of colorectal cancer by almost 70 per cent.

The effect was only shown with red wine, not white.

So maybe moderate consumption of red wine does provide some benefit.

Just remember, a study from Harvard University, reported that people who have three or more alcoholic drinks a day had a significantly higher risk of stroke.

Those who had one, or two, drinks every other day had the lowest risk.

If you enjoy it, go for it, but in moderation. But why not have your cake and eat it too.

There are supplemental sources of resveratrol that allow you to get this important antioxidant without drinking massive quantities of red wine.

Still, if you enjoy drinking it and want to get the health benefits of red wine, "Wines produced in cooler regions or areas with greater disease pressure, such as Burgundy and New York, often have more resveratrol," according to the Oxford Companion to Wine, whereas wines from drier climates like California or Australia have less.

Because the skin, seeds and vine of red and purple grapes are used in its fermentation, red wine has much more resveratrol than white wine .

Resveratrol is a potent antioxidant which has the potential to treat diabetes, cancer, and arthritis as well as a host of other diseases and extend life but you are unlikely to get enough from red wine to make a significant difference in health.

You can find out more about resveratrol at my Resveratrol page: